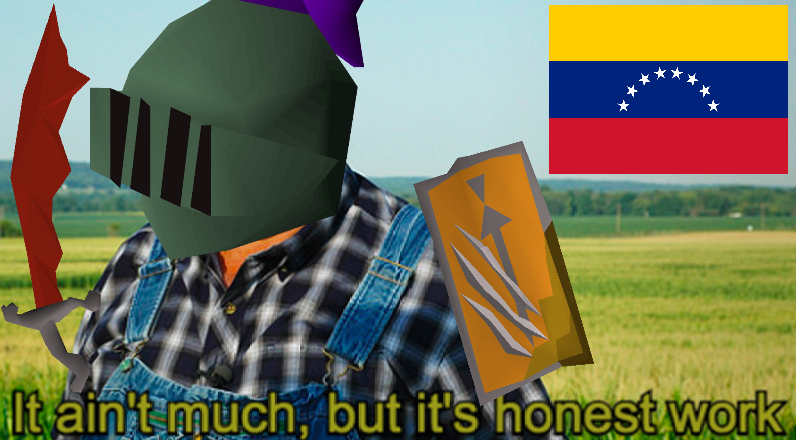 If you thought remote work was game-changing, wait until video game work gains traction. Blockchain-based NFT games such as Axie Infinity and Splinterlands have demonstrated that a play-to-earn business model has the potential to revolutionize the gaming industry.

Pandora’s box has been opened, so to speak, and play-to-earn is here to stay. There are already people logging on to an online video game to spend their days earning a living. In this piece, we will explore what a world where earning income through video games is the norm will look like.

After Venezuela endured cataclysmic hyperinflation, it left individuals working minimum wage jobs and earning an unsustainable $5 dollars a month. However, in the wise words of Jeff Goldblum, “life finds a way.” Individuals had devised a means to earn a living through playing the video game RuneScape (OS).

This was achieved in a form of in-game labor — gold farming — where users would play the game to extract various items to sell to users for United States dollars. This happened despite the RuneScape developers Jagex forbidding any form of transaction of digital items for real-world currency.

It was a controversial practice and some RuneScape players thought farmers were simply exploiting the game without contributing anything to the community. This led to them PK’ing (player-killing) players they thought were farmers. Which in turn, opened up a new earning opportunity to provide security to these player’s farming accounts. This perfectly exemplifies how new job markets can snowball. Venezuelan players were able to provide a living for themselves, and there were even some media reports of players earning more than local doctors.

As long as in-game transactions can happen between players, users will attempt to exploit this by buying items with real-world money. For the integrity of the game, it is not in the best interests of developers to allow individuals to pay to win, as it provides an unfair advantage to users with the most disposable income.

However, the fact that digital items are gaining such value and new “jobs” are being created may lead to an all-out gold rush (pun intended). It parallels the emergence of the internet and the avalanche of developer jobs that brought with it.

Blockchain gaming is still very new and if job markets can develop in games that weren’t designed for them, one can only imagine the possibilities found within games designed to allow economies and job markets to function properly.

These new markets will need to be drastically different from what was observed in RuneScape. In-game items that provide an unfair “advantage” should not be on the market for real-world transactions, as this will discourage new players that feel they have to pay their way to a playable standard. But, there is no reason why items that don’t have utility can’t be sold. In-game items that don’t have utility will usually find value from aesthetics.

Aesthetic value is not to be taken lightly. This can be seen in games like Counter-Strike where gun skins are being sold on secondary markets for $4200, and even in League of Legends where the character skin “PAX twisted fate” will set you back $300.

What sort of jobs?

Looking forward, what might jobs that provide real income look like in a blockchain governed game? While it’s difficult to speculate, I will attempt to provide some rough ideas:

One thing that will always be tied to value is time. Video games have long included time-intensive tasks in their games, and as we saw in the Venezuelan RuneScape example, players transacted their time to farm gold. The in-game items that are farmed have value because of the time it takes to gain these items. Blockchain gaming can take this one step further, where players can offer their time to extract certain in-game items for real financial incentives. This is clearly seen in Axie Infinity where players will grind quests to gain SLP, the native token for Axie Infinity. It is claimed that if Axie Infinity players invest the necessary time they can earn up to 4,500 SLP a month which is currently worth around $935.

As mentioned, aesthetics can represent serious value to some users. Blockchain sandbox MMORPG game Ember Sword has realized this and will open up the design process of items to game users who can spend time designing a new aesthetic skin (an item that represents the same utility but differs by how it looks) and sell this to other users as an NFT. These NFTs can have coded royalties that will allow both the user who designed the item and the developers to own a percentage of royalty to further receive profits if the item is sold for a higher price on the secondary market. There is then a further scaling possibility for users to brand their items and even create an in-game company by hiring virtual employees to apply their branded design fundamentals to items. This same principle can be applied to virtual architects, interior designers and stylists, and the list goes on and on.

Personalities can be very valuable and this is most clearly seen in twitch streamers. There are individuals who, although lacking skill or technique in video games, attract millions of viewers. There are opportunities for certain individuals with “attractive” personalities being paid to simply spend time around a certain area of virtual land to bring in more users to the area. This may be something you would want to pay someone to do if you owned, for example, a virtual casino, so the deal may be mutually beneficial financially. Again, a form of royalty/commission can also be present here for certain users as an incentive to fulfill this role to a high standard.

One tried and tested in-game value generation task can come from dungeons, raids and boss fighting tasks. This will typically involve users having to battle their way through a large number of enemies to get a final boss who, if users can defeat, will drop the most valuable in-game items/loot. This kind of in-game work is both skill- and time-intensive. Therefore, it is specifically targeted at those who are more experienced players. However, it also poses opportunities for better players to offer their “services” to help less experienced players accomplish these tasks.

A note of caution

How these technologies, and the jobs they bring with them, will play out is still a mystery. This means we should be proceeding with sensible cautiousness. There is a risk that better and easier financial gains to be made playing video games in less economically developed countries may attract workers away from more important tasks, as we saw with reports that some RuneScape players were outearning emergency services workers.

One caveat to this is that these digital economies draw from a global market, not just a local market, and it seems like it would bring additional money and opportunities into less economically developed areas as we’ve seen with Axie Infinity in the Philippines.

One beautiful thing about cryptocurrency is the freedom that it provides to users to control their own wealth. What we are seeing with blockchain gaming is an evolution of cryptocurrency. To some, it is just a cool new feature where our items are tradeable for profit, independent of the parameters of a single game. To others, this is a life raft, a means to bring an income that is so desperately needed in a completely new and revolutionary way. Who would have thought that video games could unironically represent a life well spent?