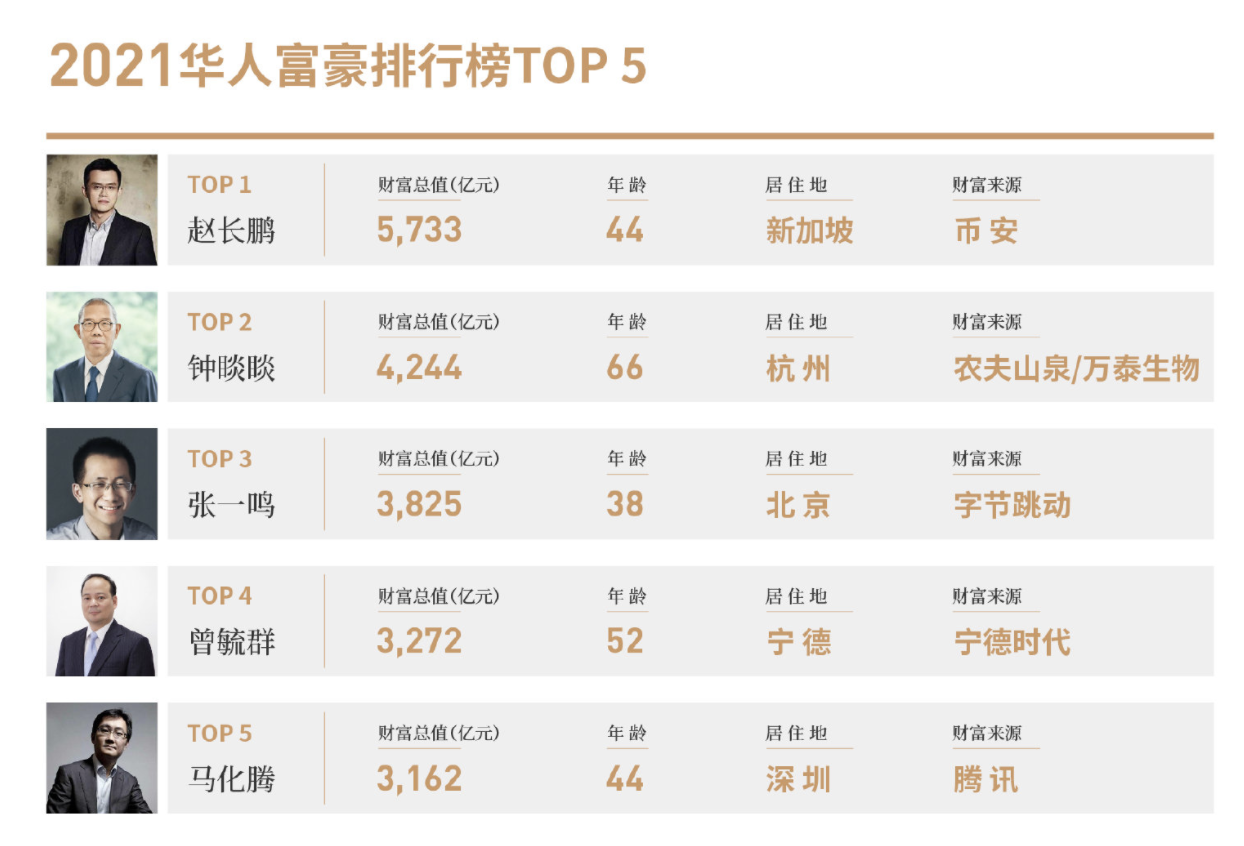 Top of the food chain

This probably won’t come as a surprise to anyone in the crypto industry, but Binance founder CZ has been crowned the richest Chinese person in the world. The list appeared in Caijing Magazine, a financial publication based in Beijing.

CZ was credited as having a net worth of around $90 billion, a huge jump over former richest Chinese man Zhong Shanshan, a bottled water mogul worth around $66 billion. CZ’s source of wealth was listed as Binance, a company that has not seen eye-to-eye with Chinese regulators, and is now often banned by internet search engines within the country. In fact, many average citizens in China have probably never heard of CZ prior to seeing this list.

Interestingly, CZ’s location was listed as Singapore, making him the only person in the Top Five not based in China. Ironically, being on this list probably isn’t something to celebrate for the people in China as this year has seen a harsh crackdown on the super-wealthy.

Who? Most Chinese citizens will be seeing CZ’s name for the first time. Source: Caijing Magazine

Rounding out the top five rich list included the founder of Bytedance and TikTok, an electric car battery maker, and Pony Ma, the founder of Tencent. The real question should be which other early crypto whales from China might be hovering on the fringes of this list, even if their wealth is not publicly known.

Media company BlockBeats posted a photo of CZ from 4 years ago, as Binance was beginning to take shape. The photo from Shanghai showed a number of early team members posing in an office building hallway, long before the organization swelled to thousands of members and Binance became such a powerhouse in the Fintech space.

Also pictured was a young Vitalik Buterin, who was singing Chinese karaoke songs while raising investment for Ethereum. These pictures are proof that four years in crypto can be very rewarding, but also can age a person tremendously.

Future of SocialFi is English only

Monaco was the headline-grabbing project of the week, with the decentralized social network teasing users with the hint of a lucrative airdrop. Inviting users, gaining followers, and getting likes were ways for users to increase their allocation in the airdrop, along with ownership of cartoon yacht NFTs from Opensea. This naturally caused a flurry of users signing up and sharing their invite codes throughout Chinese crypto channels on social media.

After signing up, pornographic and sexually explicit content became an easy way for users to farm follows and likes, causing one user to point out that instead of SocialFi the platform should be categorized as PornFi. The big twist was when Monaco announced on Twitter that only English content would be counted towards content mining:

This received over 500 comments on Twitter, with many Chinese users reacting angrily. Another twist was soon revealed as a user pointed out that the codebase returned error messages in Chinese. A Whois database search even revealed that the company had been registered in Beijing, further amusing users, or in some cases, infuriating them. 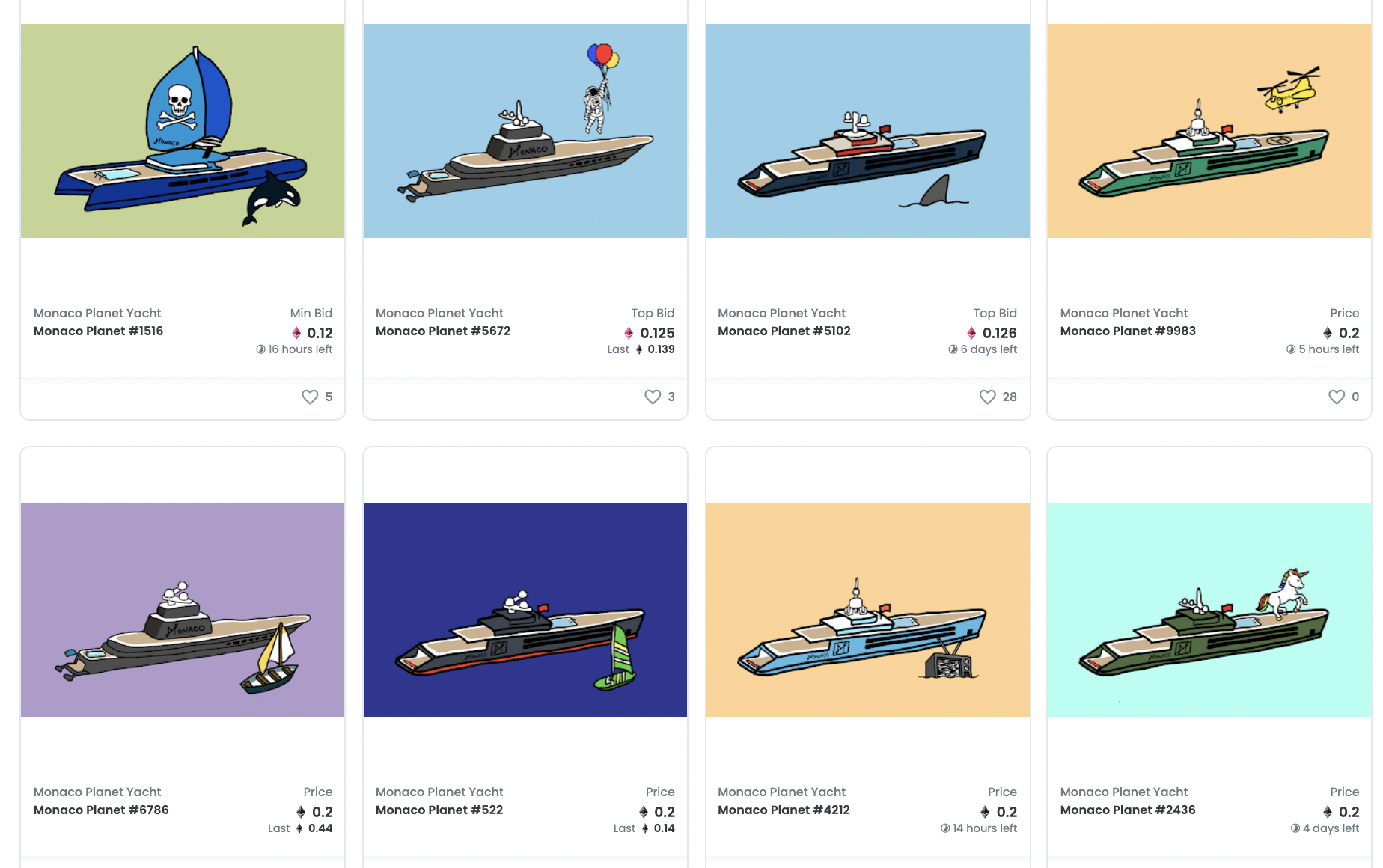 Despite the early PR difficulties, Monaco is shaping up to be an interesting player in the SocialFi scene. Backed by the famously shrewed Three Arrows Capital, the social media network allow users to sign up and show off their NFT collection just by using a MetaMask wallet. With the amount of publicity Metaverse and SocialFi applications are getting around the world, Monaco might be able to leverage clever tokenomics and a smooth user experience to carve out an active user base.

On November 30, Huobi founder Du Jun told Bloomberg that Huobi Group has chosen Singapore as its regional headquarters. After leaving China, it’s been a bumpy road for the storied exchange. On November 25, Huobi launched MonoX Finance’s MONO token on Huobi Primelist, a launchpad for new tokens. Five days later, the MonoX smart contract platform was hacked for $31 million dollars worth of ETH and other tokens. Needless to say, new MONO buyers on Huobi wont be happy to see the token price lose over 30% in the first week of existence.