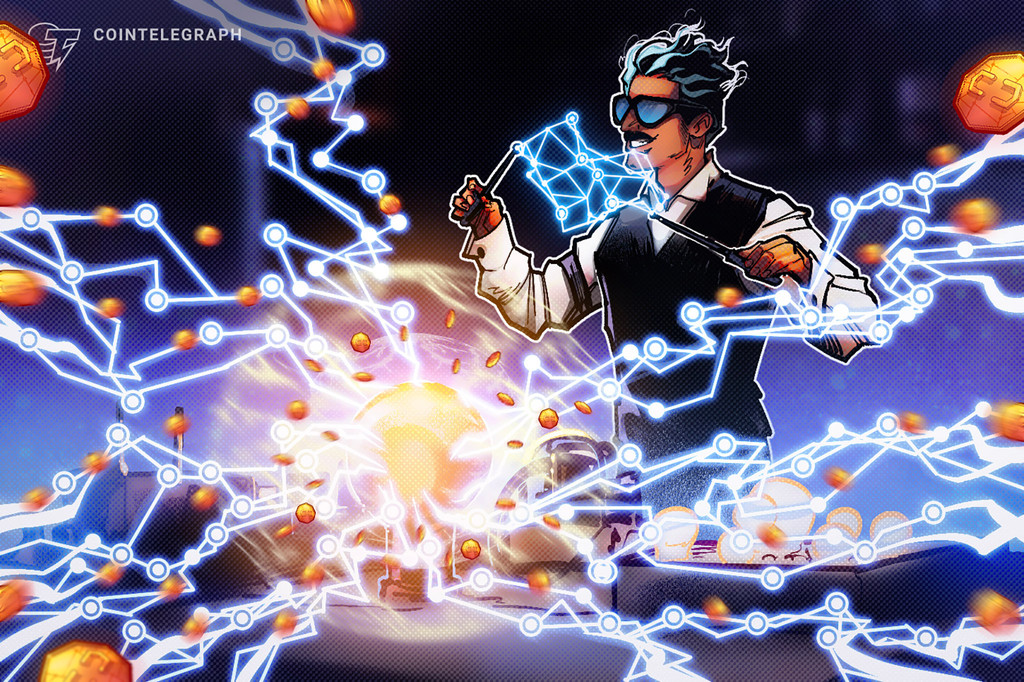 Can you earn passive income running a Lightning node?

A Lightning node is a piece of software that links to the main blockchain network and the Lightning Network, itself.

But what are the benefits of running a Lightning node? To fully explore and appreciate the pros of LN technology, you must have at least one node up and running. Regardless of their network, anyone can run a node thanks to decentralization. So, how many lightning nodes are there? The number of public lightning nodes and merchants' payments over the Lightning Network is increasing regularly.

The Lightning Network is built by individual payment channels between parties united to route transactions. The LN is the outcome of the interconnections between multiple payment mechanisms.

The Lightning Network is a second-layer solution built on top of the Bitcoin blockchain to solve issues like long transaction confirmation times. An unstructured network surrounds it, and payments are made using channels, which are ad hoc peer-to-peer connections. In a channel, any number of payments can be sent. Nodes that are run by individuals or corporations route payments to keep the network running.

Any quantity of BTC must be locked up in a payments channel before using the Lightning Network. Then, until the channel is closed, it can be spent across the LN. An invoice, a long alphanumeric string of digits frequently represented by QR codes, is created by those who wish to receive a transaction. The person making the payment just scans the invoice with their Lightning Wallet and confirms the payment by providing a digital signature.

The payment confirmation is instantly sent to the original creator of the request and happens in a few seconds. Payments are not subject to long wait periods or excessive fees because they are not made on the Bitcoin blockchain. This means that micropayments of as little as one satoshi can be made using the LN. After using the network, one can exit by closing the channel to use their BTC on the main Bitcoin blockchain.

So, can you make money running a lightning node? The most obvious answer is ldquo;Yes,rdquo; but your profit might not necessarily be expressed in satoshis. You can earn BTC by forwarding transactions from other Lightning nodes through your node. Make sure your node is financed by sending BTC to your node wallet address and establishing channels with other nodes so you can begin earning BTC by participating in the Bitcoin Lightning Network.

The prerequisites to run a Bitcoin Lightning node include an amount of Bitcoin to fund your Lightning channel, fiat money to buy the hardware equipment(s), and a Lightning-compatible wallet.

Remember that Lightning nodes are non-mining nodes, which means you aren't mining Bitcoin but are vital to validating Bitcoin blocks. Validation Nodes are the most common name for these. MyNode and Umbrel are two of the most popular specialized hardware options for validation nodes. In just a few simple steps, you can set up a new myNode device.

To begin, download the myNode image for your device type and follow the instructions on the download page to flash it to an SD card. After that, turn on the device and connect an external SSD. You'll be asked to type in your product key. You can select that option if you're using the Community Edition. Otherwise, enter the product key that was emailed to you or that you can find on the bottom of your device.

The device will then start synchronizing the Bitcoin Blockchain! Depending on your device and network capacity, this process could take several days. The web interface of the myNode device will show you the current synchronization status. The device will automatically keep connected with the Bitcoin network and display the main application page once the initial sync is completed.

Use the default credentials as Username: admin and Password: bolt (it is recommended to change your password) to start using all the features myNode has to offer. The next step is to create a Lightning wallet on your myNode. Go to the main myNode page and click the "Lightning Wallet" button to create the wallet. After that, click "Create Wallet" to get a seed phrase.

This phrase is crucial, and anyone who knows it can access your money. Make a note of this sentence as a backup, and don't tell anyone! After you've written down your seed phrase, click "Continue." Re-enter your seed phrase on the next page to ensure your backup was generated correctly. To make your wallet, click "Create."

If your phrase is correct, you will be redirected to the main Lightning page, where your Lightning wallet will begin syncing and setting itself up. The Lightning wallet should be ready in a few minutes, and you should see a page similar to this: 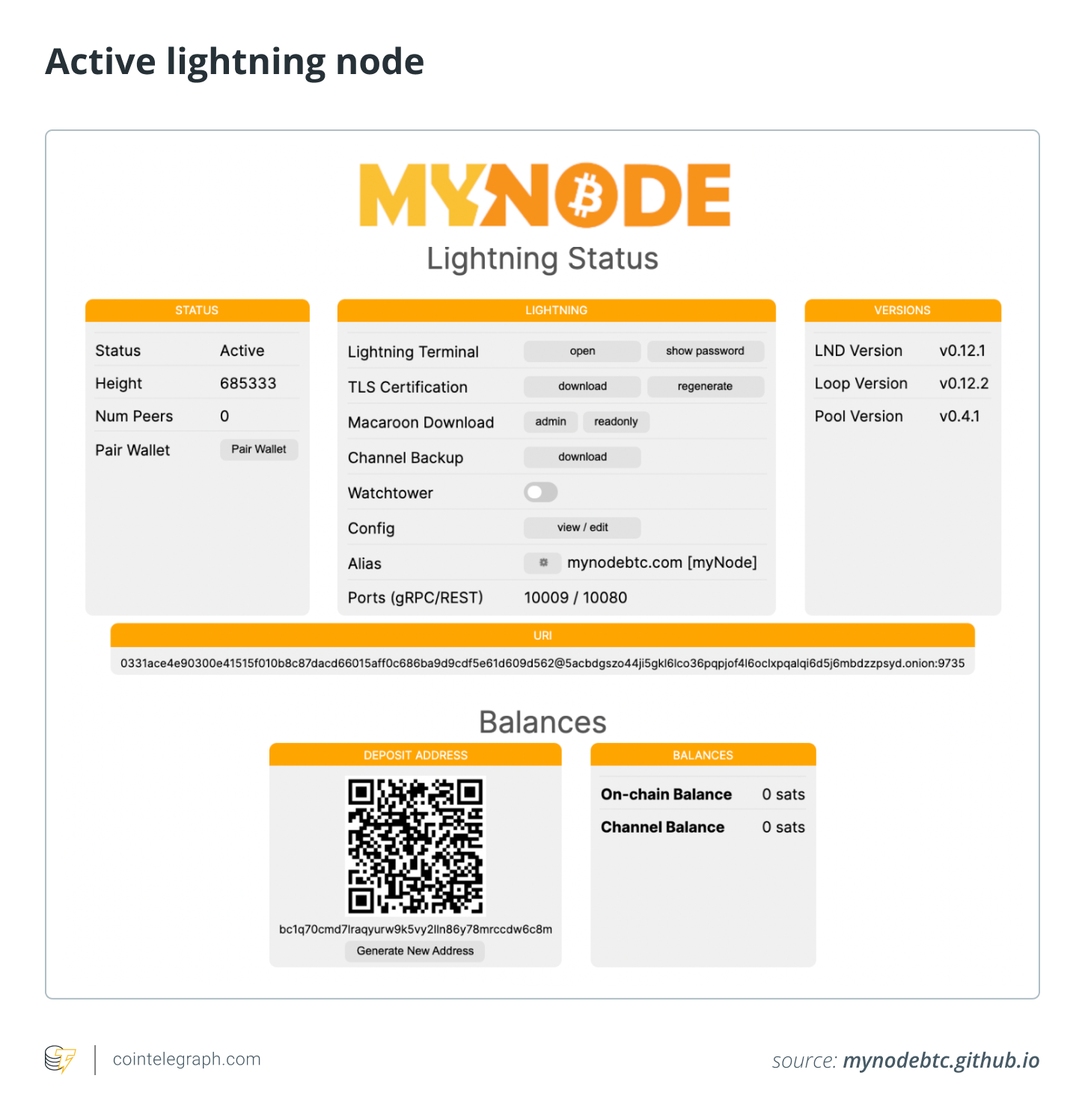 Lightning nodes search out the most efficient method for processing transactions. To be lucrative, you'll need to set your own node's charge low enough that you're considered affordable by the network but high enough that it turned out to be one of the best ways to earn passive income with crypto.

Running a node is more like art than a science because special care and attention are required for each channel. When assessing fees, traffic flow, which channels to open and close, and rebalancing, you need to look at how traffic moves and how much it costs to move the traffic by focusing on a more macro view over time. So, how do you make passive income with nodes?

To feed the traffic, consider adjusting your channels. However, until traffic goes both ways, don't keep a channel perfectly balanced. For example, if traffic travels in one direction, as it does on many channels, then sats must be constantly pushed or pulled back to feed the traffic.

In addition to the above, it's a good time to look at routes during rebalancing. For example, you can see where things can be moved for a low cost, which is connected to whom, and where you can open a channel to one of the connecting nodes to reduce fees and increase routing potential.

Setting up a Tippin.me account to accept tips on social media via the Bitcoin Lightning Network is perhaps the most accessible and user-friendly way to make money with the Lightning Network. Additionally, you can earn a few sats every time someone transacts through your payment channel by supporting the rapidly growing Lightning Network.

The video creators may want to check Light Tube, a web-based platform similar to YouTube that allows users to publish videos in return for BTC via the Lightning Network. Users wishing to see a high-definition video must pay the required fee (usually 100 satoshis). On the other hand, uploaders can use LN payments to redeem the money they've earned from their videos.

But, how much does it cost to run a Lightning node? Remember that making money is not a motivator for running a LN, as Lightning node profit is usually a few pennies per month at best. On average, the gear necessary to run a node will cost between $200 and $400.

Routing fees, channels being fraudulently closed, the exposure of nodes to online theft and malicious attacks are a few problems with the Lightning Network.

Routing fees are among the vital Lightning Network problems that are required to transfer payments between channels. However, nodes do not get any reward in return for facilitating payments. Also, fraudulent channel closure, which means one party closes the channel without notifying the other party, leading to offline transaction risk is another issue with the LN.

To transmit and receive payments on Bitcoin's Lightning Network, nodes must always be online, making their private keys susceptible to hacks, thefts and scams. However, cold storage can help prevent the loss of keys and users' funds.

Moreover, participants may be unable to retrieve their money back quickly enough if the payment channels become overloaded due to a malicious attack. Therefore, before investing in any projects, ensure that you conduct reasonable due diligence, such as assessing different blockchains and analyzing crypto tokens.